Study in PD of Exercise (Corcos,PI)

A new Phase 3 multi-site clinical research trial from Northwestern Medicine will test if high-intensity treadmill exercise is more effective in decreasing the signs of Parkinson’s disease in individuals who have not initiated medication for Parkinson’s. 29 sites (27 in U.S. and 2 in Canada); has added Morehouse, PSG’s first HBCU- based site. Funded by NINDS.

Mapping the Future of Parkinson’s Disease

People with Parkinson’s can receive genetic testing and genetic counseling by participating in PD GENEration, sponsored by the Parkinson’s Foundation in partnership with the Parkinson Study Group.

PD GENEration: Mapping the Future of Parkinson’s Disease, is a first-of-its-kind national initiative that offers free genetic testing for clinically relevant Parkinson’s-related genes and free genetic counseling to help participants better understand their results. Additionally, genetic testing results obtained through this study will be de-identified and stored in a secure central database for future Parkinson’s-related research.

As a result of COVID-19, the Parkinson’s Foundation expanded their study to offer virtual participation nationwide through telemedicine with an at-home cheek swab kit. The study has enrolled over 400 participants to-date.

Click here to learn more about PD GENEration or if you are interested in enrolling in this study.

A remote home-based clinical trial to determine whether or not a single dose of zoledronic acid can prevent fractures and reduce mortality in people over 60 with PD and other types of neurodegenerative parkinsonism. The trial is sponsored by the NIH and is a partnership with the Parkinson’s Foundation. Currently expanding PSG site participation . A paper describing the TOPAZ study design is newly published.

The Stoparkinson Earstim-PD study is moving along! The virtual Investigator-Study Coordinator meeting held on February 20, 2021 was well attended. Site Initiation visits (SIVs) are currently being scheduled for this 8 site US, prospective, randomized, double-blinded sham-controlled, within-subject design, 3-treatment, 3-period crossover study that is expected to enroll 38 subjects with Parkinson’s Disease who have the wearing off phenomenon on oral levodopa therapy. All participants will receive 3 treatments on different days, each with different stimulation conditions. All subjects will wear the Earstim device on the ear ipsilateral to the side of the body more affected by Parkinson’s for 120 minutes during each of the 3 treatment applications.

AT-HOME PD enrolled 226 participants –125 and 101 from the STEADY-PD IIIand SURE-PD3 clinical trials, respectively, to follow them for two more years by a) annual tele-visits with a movement disorders neurologist, b) quarterly smartphone tasks(via the mPower app) and c) patient-reported outcomes(via Fox Insight). As of May 10, 2021, 137 members of this original cohort have completed the final study tele-visit (V02; graph below).

Due to the increased demand for research tele-visits created by the COVID-19 pandemic, the AT-HOME PD study shared its experience including the study protocol via the study’s website (https://www.athomepd.org/professionals) with other ongoing clinical studies and research professionals seeking to convert to remote assessments. In December 2020 the AT-HOME PD team published a paper in Annals of Clinical and Translational Neurology with the objective of outlining the study methodology and providing guidance on how to launch and conduct virtual PD studies.

The trial is registered on clinicaltrials.gov (NCT03538262).

In recent years, scientists have learned that improving representation of all people in clinical research is an important way to fully understand diseases. This ensures that new treatments work well for everyone. However, appropriate representation in clinical research for Parkinson’s disease has been difficult. Some recent studies have reported that more than nine in 10 research participants are non-Hispanic Caucasian even though Parkinson’s disease affects people from all walks of life. While scientists understand some of the barriers preventing certain groups from participating in these studies, many solutions have not been tested. Led by Jonathan Jackson, PhD of the Community Access, Recruitment & Engagement (CARE) Research Center at Massachusetts General Hospital, the FIRE-UP PD study focuses on improving awareness and participation from groups and communities that are not often part of Parkinson’s research studies. The study tests new ideas to raise awareness of Parkinson’s research studies, particularly for the online study, Fox Insight.

This study will take place in movement and disorder clinics around the United States. Half of clinics will develop individual plans to raise awareness of the Fox Insight study to underrepresented patients and fellow neurologists. These will be compared to control clinics who simply display Fox Insight study materials in waiting rooms, which is often how clinical studies are advertised. After a six-month period, the clinics with individual plans will be compared to one another, as well as to the clinics who only displayed information in waiting rooms. Researchers will be looking not only at which clinics can enroll underrepresented groups to Fox Insight but also how aware, interested, and engaged patients and their neurologists are with regards to the Fox Insight study.

This study is funded by the Michael J. Fox Foundation and is distributed through Massachusetts General Hospital. 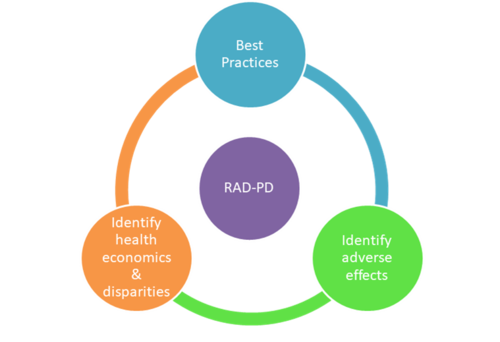 RAD-PD is a quality improvement patient registry that systematically and prospectively characterizes a large cohort of patients with Parkinson’s disease (PD) undergoing deep brain stimulation (DBS). The project is funded by the Michael J Fox Foundation and the Neuropoint Alliance serves as the data management and coordinating center. By assessing real-world DBS care, RAD-PD seeks to identify best practices surrounding DBS for PD, investigate adverse effects and their determinants, and describe the disparities in outcome and health economics of DBS. The project launched in October 2018 with the first patient enrolled in March 2019. Although 2020 was a difficult year for RAD-PD due to nationwide pandemic shutdowns, registry leadership and management successfully relaunched the project in a new data management platform. As of April 2021, close to 130 patients are enrolled in the registry from 20 participating sites and ongoing data collection is occurring, with new patient recruitment, and surgical and 6-month follow-up data being actively collected. A presentation describing the registry was presented at the 2021 North American Neuromodulation Society meeting and a poster describing the baseline characteristics of a subset of the enrolled cohort was presented at the 2021 American Academy of Neurology Annual Meeting.

The PSG, under the direction of Ray Dorsey, MDMBA and Jamie Adams, MD (University of Rochester) is conducting a multi-center, observational study in individuals with early, untreated PD. The purpose of the WATCH-PD study is to obtain and compare information on early PD progression from traditional examinations and questionnaires with health-related information from wearable sensors and study-supplied mobile devices (smartphone and watch). Funding for the trial has been generously provided by Biogen and Takeda.

The trial is registered on clinical trials.gov (NCT03681015). This study completed enrollment on 12/28/2020. 82 PD participants and 50 control participants were enrolled at 17 PSG sites across the US. Currently, 23 participants have completed the trial, and all month 1 and month 3 visits have been completed.

The PSG is supported by: